June is often considered the “in-between” season, or I as like to think, the grand transition from spring to summer.

First, the formulaic removal of more than 300,000 spring bulbs and underplanting’s, followed by endless beds to be rototilled and prepped before the summer plantings can begin. A daunting task that lies before us one might surmise, but it is systematically tackled with ease. Careful planning is key to the success of the transition. The flower beds have all been well coordinated and designed; now, it is the communication between the designers, the growers, and the grounds staff that is critical. We have become skilled at dealing with misfortunes and quickly devise alternative solutions when dealt a setback such as a crop failure. We make it look easy! 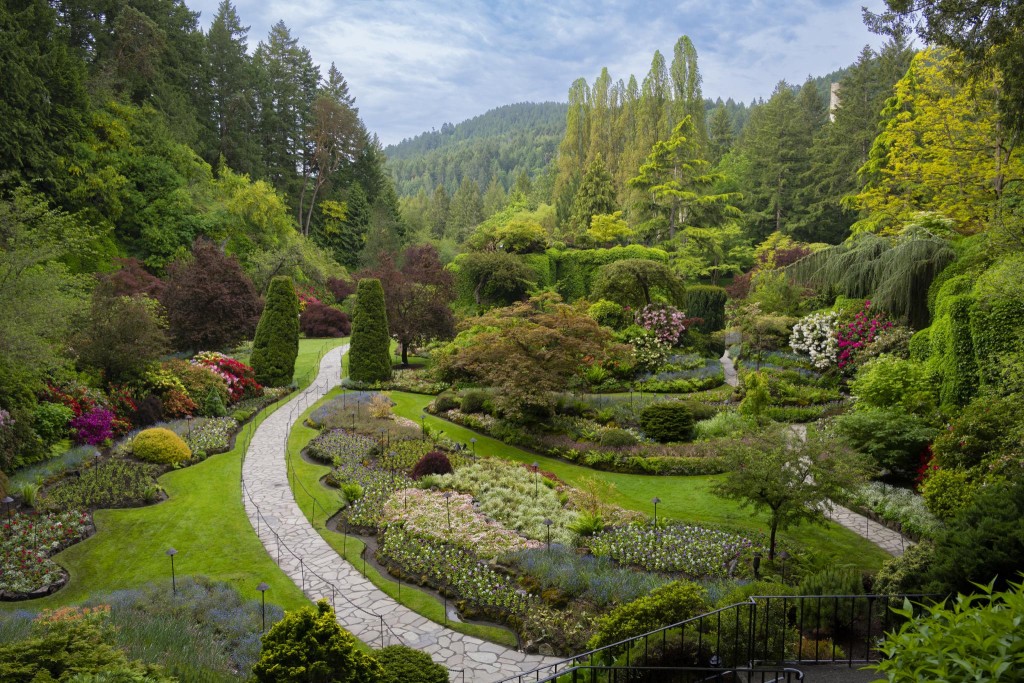 The Sunken Garden at the beginning of June

June at The Gardens has a much subtler allure; after all the spring bulbs have finished blooming, attention is drawn from the mass plantings to all the little things that begin to appear each day.  A walk along the shrub and perennial borders where gorgeous Deutzia and fragrant Philadelphus (Mock orange) gracefully arch amongst the late spring perennials and the most stunning Peaonia. The Peonies range in many shades of pink, red, coral, and white. Approximately 40 varieties are grown here at The Gardens including the striking Japanese- form, ‘Sword Dance’ which bears bright pinkish-red flowers with yellow petaloids, and the beautiful ‘Sarah Bernhardt’- steeped in poise and elegance with layers of ruffled pink petals atop sturdy stems. These iconic blossoms are drenched in a sumptuous fragrance that attracts a host of pollinators. Alongside the beauty of the Peonies is the great collection of Iris. More than 70 different varieties are found amongst the perennial borders. Some noteworthy varieties are the deep dark purple, almost black bearded Iris ‘Superstition’ featured along the border near the Rose Garden and the spectacular ‘Edith Wolford’ with blue-violet falls crowned by yellow standards. 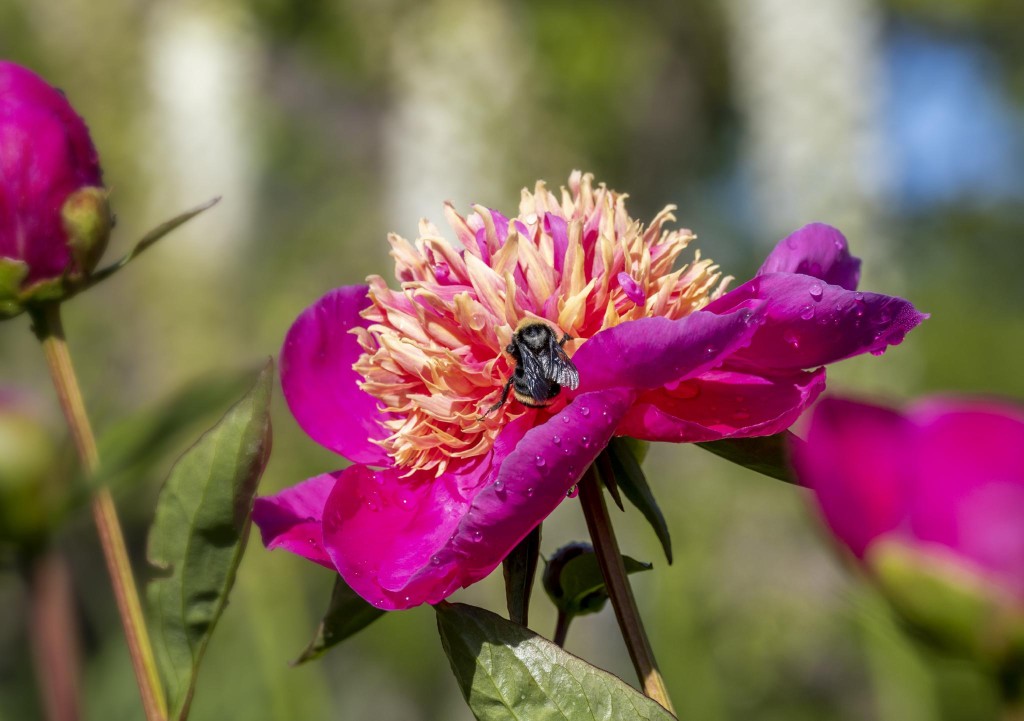 Bumble bee drawn to the fragrance of the Peony

Our most famous flower of all, the treasured Meconopsis betonicifolia syn. Meconopsis baileyi (Himalayan blue poppy) came to The Gardens after Jennie Butchart first received the seed from England 100 years ago.  She soon discovered that the west coast climate was ideal for the rare treasure. Planted traditionally in the Japanese Garden since the mid-1920’s these exquisite flowers with clear blue silky blooms have been the botanical wonderment of the past century. The Meconopsis baileyi (now known as Meconopsis betonicifolia) was formally named in 1912 by British officer Lt. Col. Fredrick Marshman Bailey, further research indicates it was actually discovered in the mid 1800’s. Botanists have long debated the exact species for years and it has been somewhat of an enigma to those who seek undisputable science. 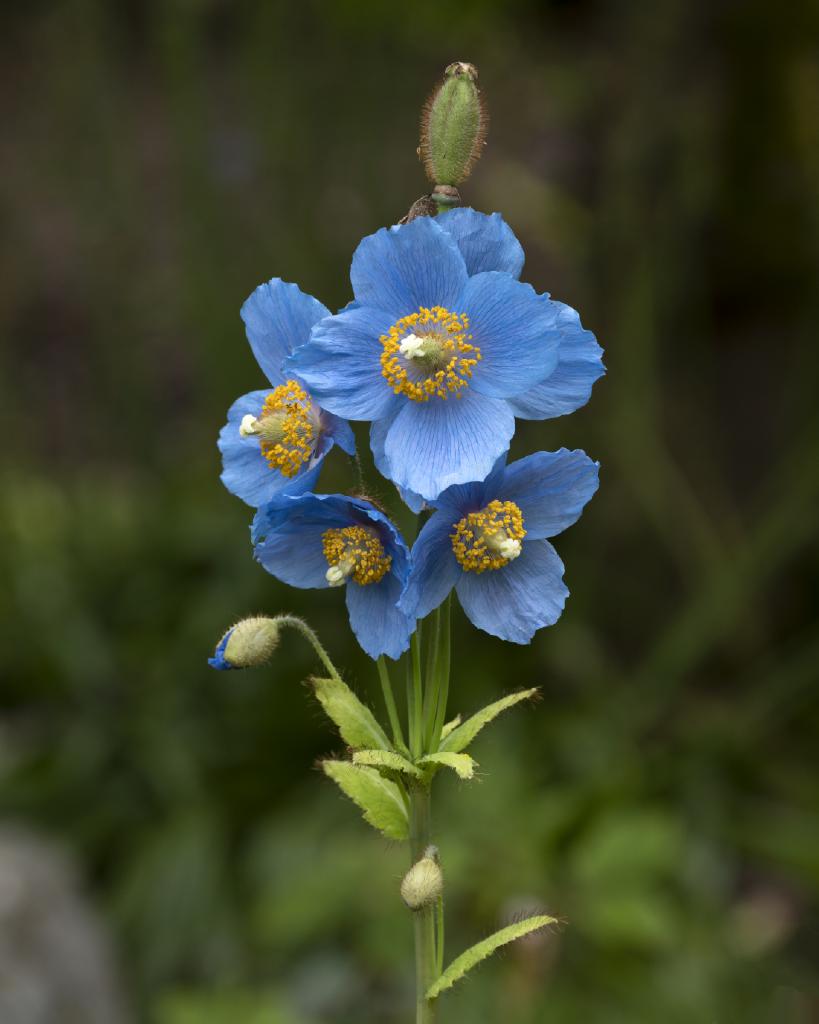 Other highlights at this time include the extraordinary collection of Rhododendron shrubs. Just reaching their prime now, the relentless blossoms have thrived in this cooler than usual spring here on the west coast.  The classic ‘Irene Koster’ Azalea fills the garden air with an unforgettable sweet perfume. Planted in mass along the exit path of the Japanese Garden, these soft pastel beauties evoke pleasant memories of the days of June. 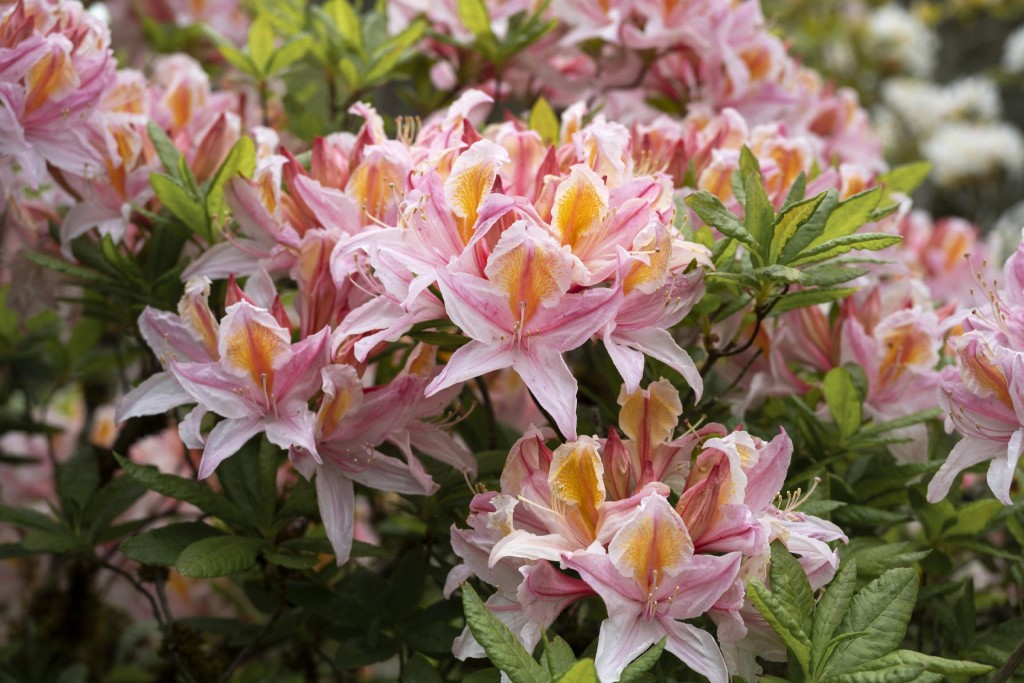 Plants, trees, and shrubs that are currently blooming